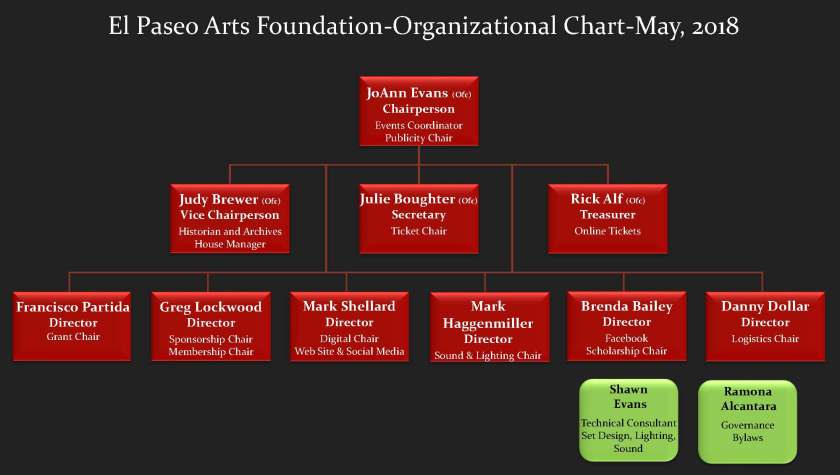 El Paseo Arts Foundation is governed by a Board of Directors.

Jo Ann is a life long patron of all the arts, but her personal art form is theater. She studied it in college earning her Bachelors in Speech from Northwestern University and her MA in Theatre from Governors State University. She taught children’s theatre and high school speech and drama and was a performer and director for more than 30 years in a community theatre in the Chicago area.

Since moving to South Padre Island, she has performed in the Camille Playhouse in Brownsville in several performances and is a season ticket holder there. She served as a City Council member for South Padre Island for eight and a half years. Since El Paseo Arts Foundation’s inception, she has been actively involved in coordinating events, performing in shows and directing El Paseo Arts productions. Jo Ann is also working to develop connections between the various arts groups in the lower Rio Grande Valley.

Born, raised and lived in Texas all her life, Judy has enjoyed theater since high school.

She and her husband, Gene, met at Texas Tech.They lived in Brownsville in the 70’s where they and their three children participated in Camille Playhouse productions. Gene’s job brought them to the island in 1999 and they have supported the El Paseo Arts Foundation since its inception.

Judy has been fortunate to be in the cast of some of El Paseo’s local productions.Judy is happy to be retired after years as a secretary, pre-school teaching and retail.

Julie, mother of three, has been a teacher for ten years and has taught the high school class at Laguna Madre Christian Academy for the past four years. In addition to teaching, Julie directs, stages, and creates costuming for the LMCA school play each spring. She and her husband Dave have both enjoyed acting in many of the El Paseo productions and look forward to the possibility of directing in the future. Julie is currently serving as the membership committee chair and looks forward to the opportunity to meet new members!

Wisconsin native, but has lived in Texas along the border for the over 30 years. Rick has lived in the valley with his wife, Marilu, for the last 15 years and plans to retire here. He has worked in manufacturing from Mexico to China mostly making components for the automotive industry and is a CPA in both Texas and Wisconsin.
Music has been part of Rick’s life everywhere he’s been. However, he was reintroduced to the theatre by El Paseo. He has performed in various productions with El Paseo including The Good Doctor, The Fantastiks, Side by Side by Sondheim, Murder on the Oriental Rug, Rumors, The Great American Trailer Park Christmas Musical and Putnam County Spelling Bee. He is also a member of Valley Voices, a choral group that puts on local concerts during the year.

I retired from the Air Force in 1986 after serving 20 years and began a second career with Northrop Grumman Corp. as an engineer on their military programs. After 25 years, I retired in 2011…and never looked back! Moved to SPI Golf Club in 2015 with my wife, Janet. We enjoy the weather, golf, fresh sea food and the people. We started attending the El Paseo Performance in 2015, and thought that each show was really great. My wife saw an ad in the Current/Parade Papers for an acting workshop in Sept. 2016 and said to me, “since you acted like an Engineer for 25 years, you should go to the workshop”. I did and found it very interesting. I auditioned for the shows that year, and was cast in “Don’t Dress for Dinner”. I have also worked behind the scene painting, installing and doing whatever is required to make the performances great success for the audience. The El Paseo Arts Foundation has given me the opportunity to meet great people, both in attending and participating in the shows.

I was born and raised in St. Paul, a third generation brewmaster, I received my undergrad in English and Government from St. John’s University and studied under the tutelage of Eila Perlmutter- who conveyed her belief in the insubstantiality of the material world in pursuit of the primacy of one’s spirit. I credit my dad with bestowing me with Gemütlichkeit- which I have practiced at the island brewpub for the past 23 years.

Brenda returns to the board after a 2 year absence.

Danny Dollar was born in the state of innocence & grew up in a state of confusion, finally ending up at Padre Island two years ago. He loves cool, dry climates, air conditioning, silent films and old movies. Currently employed on SPI by an employer who employs people, he enjoys working when he’s not at rest.

This site uses Akismet to reduce spam. Learn how your comment data is processed.

Tickets ($10 in advance) on sale now at Paragraphs Book Store and online at elpaseoarts.org under Tickets in the Menu.